This week I’ll conclude the series on Rotterdam, and take you to the center of public transport, Rotterdam Central Station. Opened after renovations in March 2014, 110 thousand people per day use this station for their transportation, making it Rotterdam’s biggest train station next to six other train stations.

The modern train station of Rotterdam.

The total costs of building this station are around 675 million Euro, however this complex is not only used for transportation purposes. This train station also houses offices, bars, and restaurants. From the Central Station passengers can travel by train, bus, tram (overground train) and metro (subway, underground train). The Central Station of Rotterdam not only connects Dutch cities, but also direct connections to Antwerp (Belgium), Brussels (Belgium), and Paris.

The large hall of the train station in the city center of Rotterdam also connects to the subway, tram, or bus.

The roof of Rotterdam Central Station continuous outside.

Next to this train station is the former highest building of Rotterdam (until May 2009), called “Gebouw Delftse Poort” (“Delft Gate Building“). It is 151 meters high, and is mainly used by a Dutch insurance company.

How many times did I mention the word “modern” while talking about Rotterdam?

This company is sponsor of the Dutch National Football team, hence the beautiful image on the side of the building, of the best football team in the world! 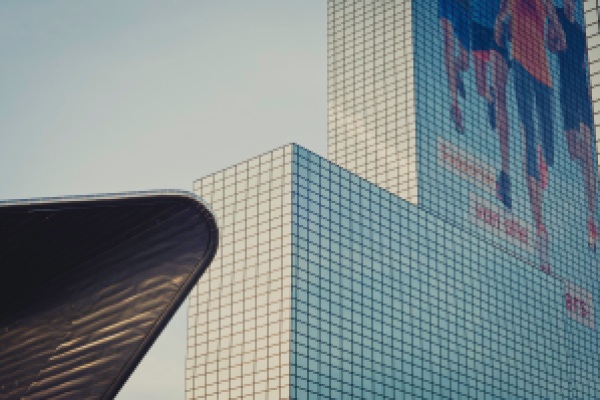 Formerly the highest building of Rotterdam. As long as I can remember an image of the Dutch Football team is posted on the side of the building.

And, if you wish, you can live near the Central Station in one of the golden apartments nearby.

Some apartments next to the train station.

This concludes the series on Rotterdam. It is the first time I have done a series and I enjoyed it quite! I might do more on other Dutch cities.

I spent a lot of time working on this website. I love it! If you appreciate this blog you could show it by subscribing to my newsletter.

Fill in the form below and you’ll stay up to date! Thank you  🙂